The Federal Communications Commission (FCC) is the federal agency responsible for monitoring, implementing, and enforcing the nation’s communications law and regulations. The FCC also promotes competition and investment in broadband services and facilities, including administration of the Universal Service Fund, a system of telecommunications subsidies and fees intended to promote universal access to telecommunications services nationwide.

The FCC’s Rural Digital Opportunity Fund (RDOF), a program of the Universal Service Fund, will fund expanded access to broadband services in unserved and underserved rural areas through a two-phase reverse auction mechanism. RDOF Phase I awarded funding for locations in census blocks that were entirely unserved by voice and broadband with download speeds of at least 25 megabits per second (Mbps). RDOF Phase II will cover locations in census blocks that are partially served, as well as locations not funded in Phase I.

In RDOF Phase I, Hawaiian Telcom and SpaceX received approximately $24.7 million to service 8,081 locations. Hawaiian Telcom’s award will fund builds to across the State at one gigabit per second download speed and SpaceX’s award will fund builds on Niihau at a minimum of 25 Mbps download speed. The deployments are expected to be completed by 2025. Below is a listing of RDOF Phase I funding and location commitments by area:

Click HERE for the FCC RDOF information site. The FCC also has an interactive map showing the eligible RDOF Phase I locations:

You may access the above map HERE to view more information on eligible RDOF Phase I areas. Click on the award areas to identify the census blocks and locations to be served.

The FCC’s Connect America Fund (CAF), a program of the Universal Service Fund, provides funding to expand access to broadband services in high-cost areas. Under Phase II of the CAF program, Hawaiian Telcom received approximately $26 million to service 11,081 locations with a minimum of 10 megabits per second download and 1 megabit per second upload (10/1 Mbps). These locations were primarily on Hawaii Island. 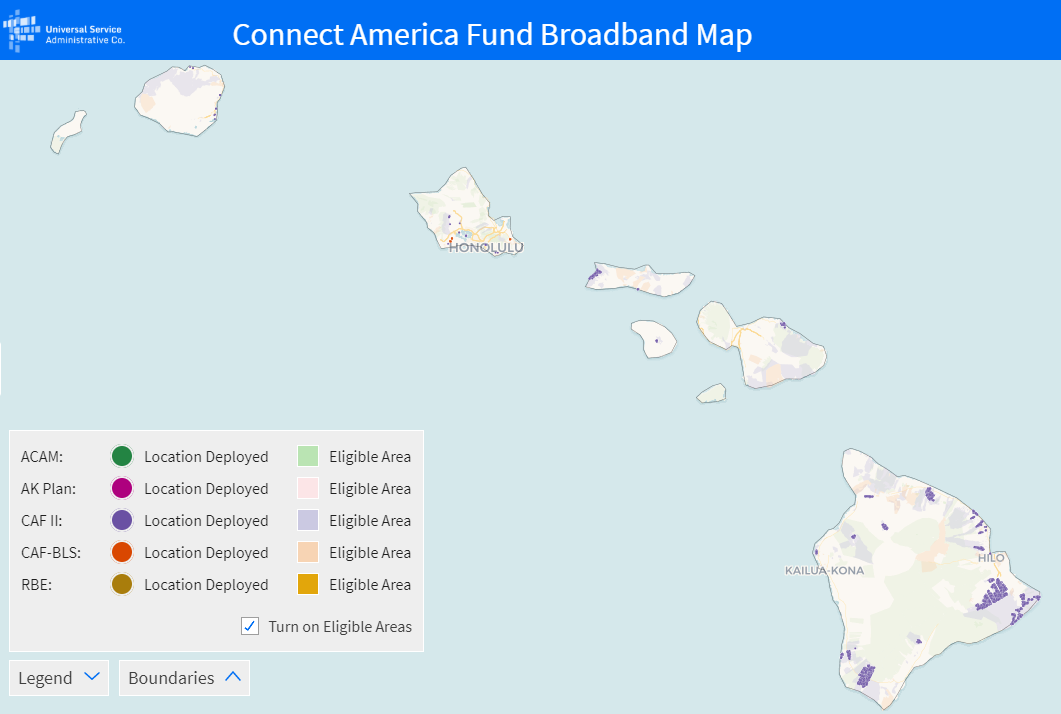 You may access the map above at: https://data.usac.org/publicreports/caf-map/ to view more information on eligible areas and locations deployed.

The FCC awarded approximately $18.2 million to Hawaiian Telcom to deploy connections to over 3,900 locations in rural Hawaii by 2025. Minimum speeds will be 1 gigabit per second download and 500 megabits per second upload (1Gbps/500Mbps). Below is a listing of CAF Phase II Auction funding and location commitments by county: 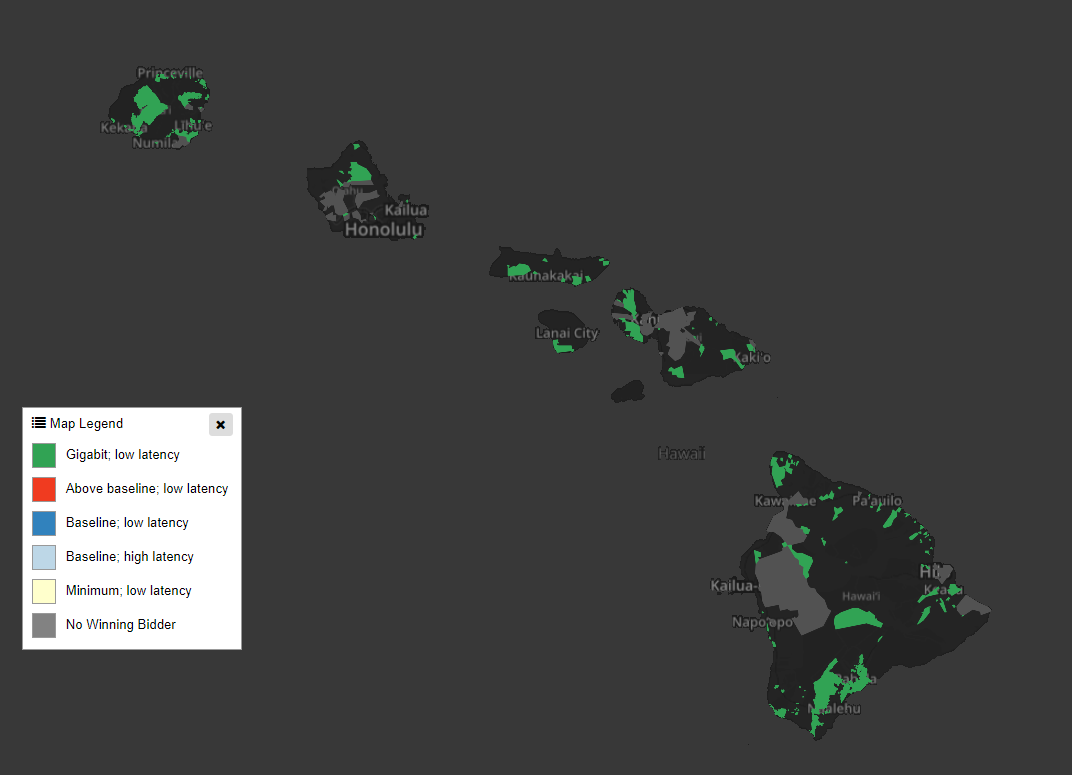 You may access the map above at: https://www.fcc.gov/reports-research/maps/caf-ii-auction-results-april-2019/ and click on the award area to identify the census block and number of locations to be served.

The FCC collects and publishes data and reports on broadband availability across the nation based upon deployment data reported by facilities-based providers of broadband service on its Form 477.

Below are resources of BroadbandUSA, a program of the U.S. Department of Commerce’s National Telecommunications and Information Administration (NTIA), whose focus includes expanding Internet access and adoption and ensuring that the internet remains an engine for continued innovation and economic growth.

Access toolkits and guides to assist communities’ and stakeholders’ efforts to expand broadband access and use and to promote digital literacy and inclusion at:
BroadbandUSA – Publications.

BroadbandUSA presents Practical Broadband Conversations webinars on topics of interest to policymakers, decision-makers, practitioners, and consumers. Access an archive of these webinars HERE.

(Access information on and register for upcoming webinars HERE).

BroadbandUSA issues a monthly newsletter with broadband news and updates, including funding opportunities, which may be accessed at:
https://broadbandusa.ntia.doc.gov/news.