The members of the winning team are: Roel Jake Ibanez, Maximiano Saludares, Mark Abucay, Marc Dave Ramierez and Cia Dela Cruz. The team was coached by Cindy Takara. The team will go on to represent Hawaii at the national competition in Orlando, Fla., April 26 to 29. Each of the winners were also awarded an iPad.

The Commissioner of Securities, Tung Chan, congratulated the winning team and said, “This is a great achievement for Waipahu High School. I’m confident the winning team has mastered LifeSmarts skills that will serve them well both in the National Competition and in their lives, too.”

Teams from Waipahu, Farrington and Kealakehe high schools qualified for the finals.

The game-show style competition tested students on their knowledge of personal finance, health and safety, the environment, technology, and consumer rights and responsibilities.

The LifeSmarts program is run by the National Consumers League and is sponsored in Hawaii by DCCA, Office of the Securities Commissioner, in partnership with the Hawaii Credit Union League.

More information about the Hawaii LifeSmarts competition may be found at http://www.hawaii.gov/dcca/quicklinks/life_smarts 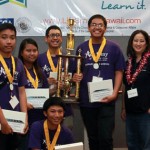